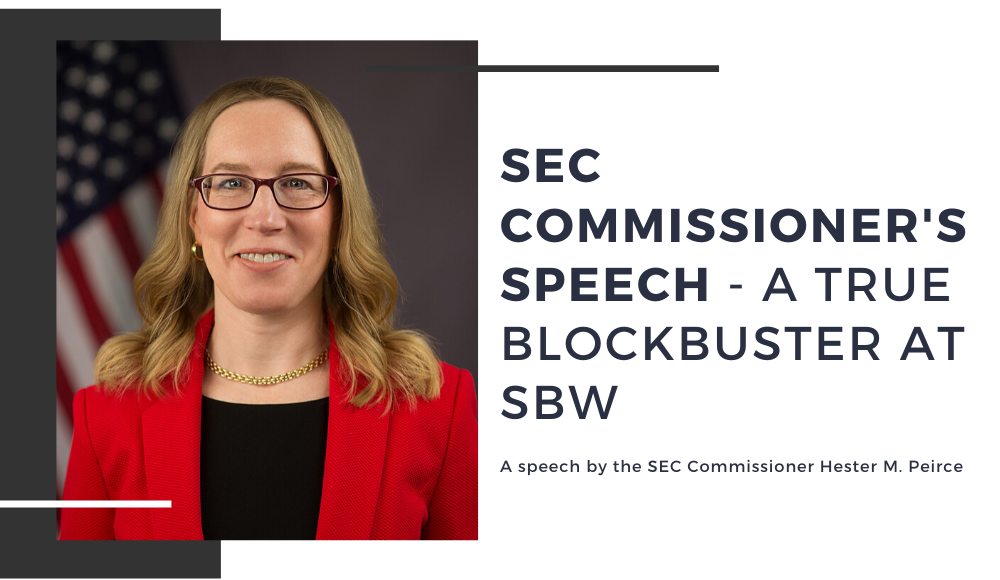 The recent Singapore Blockchain Week event was certainly quite a talked about occasion. The highlight was a speech by the SEC Commissioner Hester M. Peirce.  We have selected excerpts from the speech for our readers to appreciate the scope of her remarks.

She of course started with her standard disclaimer, as her views represented are her own and not necessarily those of the Securities and Exchange Commission or her fellow Commissioners.

That disclaimer is fitting as she discussed both crypto and enforcement, subjects on which we are not always perfectly aligned with one another.

From her perspective, “a regulator can be that objective third party.  Ideally, regulators both allow innovators their skating room and incentivize them to identify and mitigate any harmful consequences.”

“But, too often, regulatory objectivity gives way to other considerations that squash innovation.  The regulator deems the innovation too dangerous or insufficiently beneficial and sends the innovator packing.”

She went on to say that as a regulator, the SEC is charged with protecting investors, facilitating capital formation, and fostering fair, orderly, and efficient markets. For the uninitiated, back in June, Telegram agreed to return USD$1.2 billion to investors and pay USD$18.5 million penalty to settle SEC charges. We have reproduced this issue in its entirety as per her speech.

“That brings us to the Telegram case. Last month’s settlement was the unsatisfying culmination of an enforcement action that I did not support from the beginning.

Telegram had built an operational network, made good faith efforts to comply with the federal securities laws in raising funds to build that network, and engaged extensively with the SEC staff.

With the assistance of sophisticated counsel, Telegram used the Simple Agreement for Future Tokens (SAFT) offering structure, which divides the creation of the network and the delivery of the tokens into at least two distinct stages.

First, Telegram raised funds to develop the blockchain technology underlying the Grams by selling interests in the anticipated Grams to accredited investors.

In return for providing the necessary funds, the accredited investors would receive an allotment of Grams upon the launch of the TON Blockchain.

According to Telegram, this first stage—raising funds from accredited investors in a private offering—involved a securities transaction conducted in reliance on Rule 506(c)—a frequently used exemption from our registration requirements.

It was at the second stage that the sharpest disagreements erupted.  In one view, the second stage was to begin with the launch of the TON Blockchain and end when Telegram delivered the Grams to the accredited investors.

The accredited investors then could resell the Grams, subject to certain previously agreed-upon lockup restrictions.

The Case As The Company Sees It In Telegram’s view, these resale transactions by the accredited investors would not involve a security, but rather a digital currency, which could be used for buying and selling goods and services on the functional TON Blockchain.

As network effects took hold, the value of that digital currency, of course, would go up.

This offering structure is rooted in the idea that a token—even one that is initially sold as part of an investment contract—is not itself a security, but instead an asset that has use and value as a medium of exchange on a functional blockchain network.

For this reason, such tokens, once they have a consumptive use, should be able to be sold to purchasers outside of a securities transaction.

The district court in the Telegram case, at the urging of the SEC, rejected this analytical approach. In the court’s view, the accredited investors’ resale transactions were an offer or sale of a security because the Gram was an integral part of an investment contract. 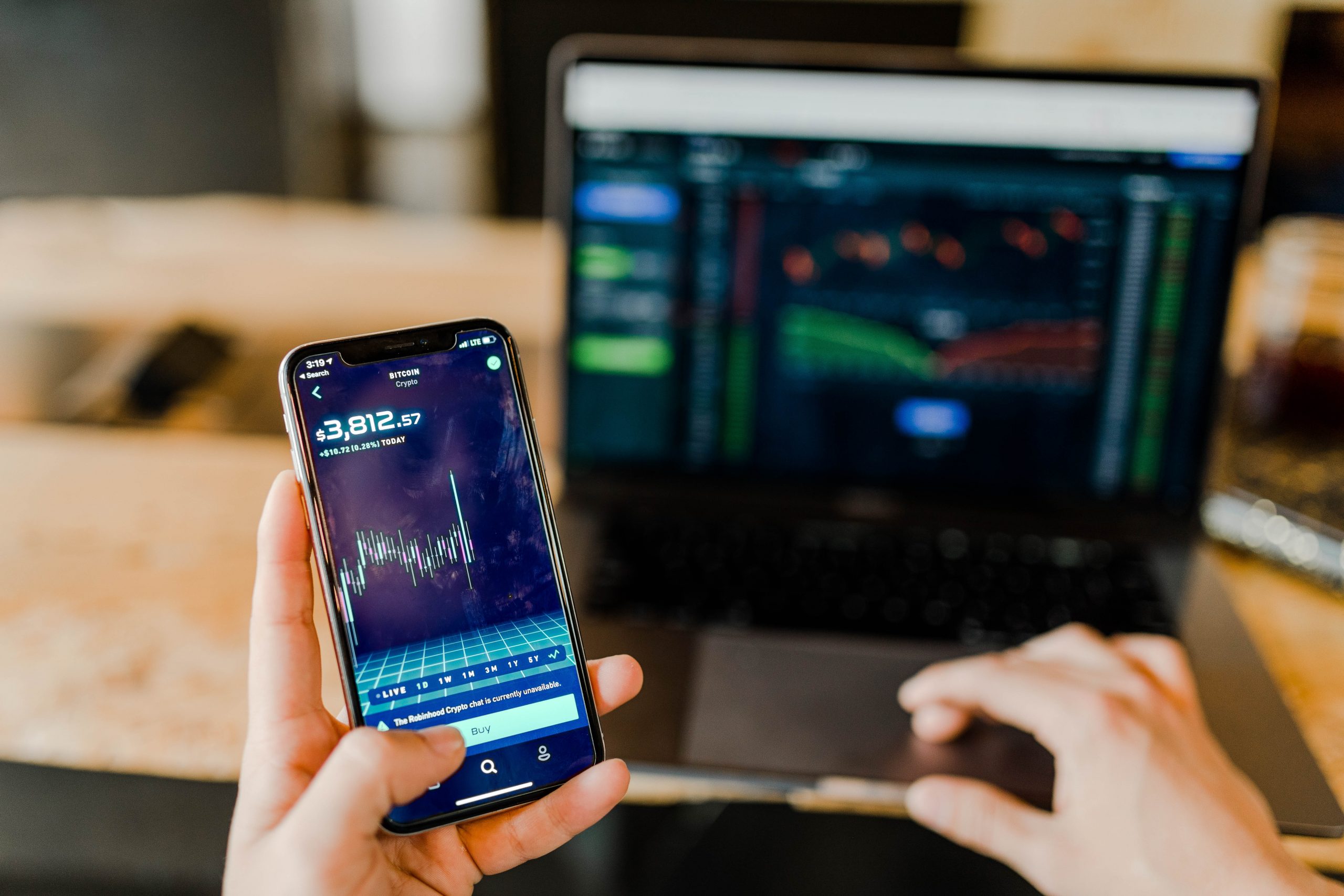 Gone is the distinction between the investment contract (the agreement between Telegram and the accredited investors) and the token (the asset to be created and delivered under the agreement).

True, the court states that “the security in this case is not simply the Gram, which is little more than alphanumeric cryptographic sequence,” but it is a challenge to reconcile that statement with the district court’s conclusion that Telegram engaged in a “scheme . . . to offer Grams . . . with the intent and purpose that these Grams be distributed in a secondary public market, which is the offering of securities under Howey.”

The premise of this conclusion, and nearly all the preceding reasoning, is that the Grams themselves are securities.  Indeed, the SEC said as much in its complaint.

Furthermore, in reaching its conclusion, the court did not grapple with the implications of the fact that the alphanumeric cryptographic sequence—the Gram—would be usable on a functioning blockchain network at the time of the distribution.

Nor did the court analyze whether the efforts of Telegram post-launch were essential to the usability—and hence the potential for increasing value—of the Grams, such that the Howey test would continue to be met.

By focusing the Howey analysis exclusively on the original transaction, the factual reality of the transaction that the court halted was lost.

To support its decision to aggregate the entire sequence into a single scheme, the court looked to the Howey Court’s refusal to treat the land and service contracts at issue in that case as separate transactions.

This is true enough; however, it was the promoter in Howey that linked the two contracts together as part of a single scheme to sell interests in orange groves.

Nothing in Howey indicates that a subsequent, separate resale of the land containing the row of orange trees—but not accompanied by a service contract—also would be a securities transaction.

After all, linking the two distinct contracts together as a means to obtain a profit underpinned the investment contract analysis; severing the link and selling only the land meant that one was just selling a row of orange trees.[19]

For this reason, Howey would seem to shed little light on whether the sale of tokens that are usable on a functioning digital network are securities simply because the seller acquired the tokens in a securities transaction.

Questions On The Ruling Bring Up International Concerns

Finally, one last aspect of the Telegram case bears mentioning.  Telegram was not a United States company, and its major operations were not in the United States.

Only 39 of the 175 accredited investors were in the United States, and those 39 provided only about one-quarter of the funds raised in the private offering. Notwithstanding these facts, when the SEC sought a preliminary injunction, it asked the district court to enjoin Telegram from delivering Grams to “any persons.”

As Telegram discovered when it asked the district court to clarify the scope of the injunction, this meant that Telegram could not deliver any Grams to any purchaser anywhere in the world.

Prevented from getting Grams into the hands of the people who wanted to use them, Telegram abandoned its platform.

This willingness of the SEC to ask for, and of the district court to grant, such sweeping injunctive relief against a non-US company, in a case where one-quarter of the funds came from US investors, reasonably might raise some concerns among our international colleagues.

While the United States certainly has the most robust capital markets in the world, and while we work hard to preserve those markets with a fair and efficient regulatory structure, we would do well to recall that our way is not the only way.

We should be cautious about asking for remedies that effectively impose our rules beyond our borders.

The SEC Commissioner Stands On Her Own

I do not support the message that distributing tokens inherently involves a securities transaction.

What the SEC’s Telegram complaint cast as evidence of an illegal securities offering—that “the project would require ‘numerosity’: a widespread distribution and use of Grams across the globe,” I see as a necessary prerequisite for any successful blockchain network.

Moreover, the settlement produced an unsatisfying result—the abandonment of the project.  I also found it ironic that the settlement included $1.2 billion in disgorgement, which will go to repay the initial purchasers, the people the district court determined were an integral part of the securities law violation.

Who did we protect by bringing this action?  The initial purchasers, who were accredited investors?

The members of the public, many of whom are outside the United States, who would have bought the Grams and used them to buy and sell goods and services on the TON Blockchain?

Did they really look to U.S. securities laws for protection?  Would-be innovators, who will now take additional steps to avoid the United States?

She ended her speech by stating that innovation in the digital asset industry has and will continue to challenge all securities regulators. “I would prefer that we not only hold accountable the reckless innovators who skate among mirrors while playing the violin, but also attempt to provide the more cautious innovators some guidance on how to avoid the hall of mirrors and on what we consider to be adequate braking technology. ,” she concluded.