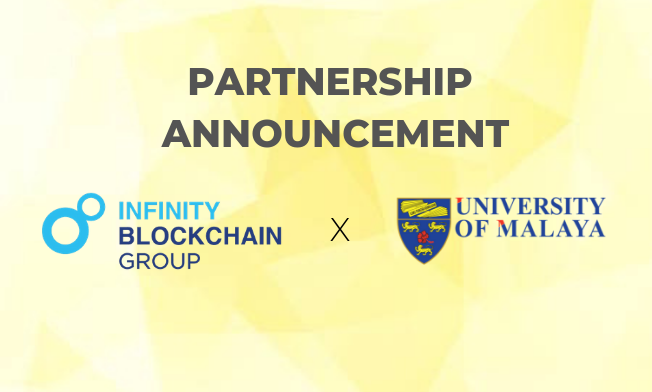 Infinity Blockchain Group (IBG) has shown time and again that it is determined to remain at the forefront of the blockchain revolution currently sweeping through Asia. Although the firm has recorded a number of success stories in its various endeavors, IBG has stayed true to the values that have brought it this far. As such, the Group has committed the bulk of its resources and time into community development, blockchain education, and product research.

In July 2018, the University of Malaya (UM) took a step further in its pursuit for a global reckoning as a hub for groundbreaking technologies when it launched a blockchain regulatory research report. While describing the feat, Dean of the Faculty of Law Assoc. Prof. Dr. Johan Shamsuddin stated, “This report produced in joint effort between academia and industry is the first of its kind in the region.”

Also speaking at the event, Vice-Chancellor of UM Datuk Ir. (Dr.) Abdul Rahim Hj. Hashim lauded the effort put into the project, as it showcased the university’s readiness to explore “initiatives by our academic community to venture into cutting-edge topics that are important to our economy and society at large.”  It is this readiness and show of technology awareness that has spurred IBG to partner with the university in its future blockchain projects. UM’s enthusiasm and IBG’s experience in blockchain development will fast track the establishment of the technology as a revolutionary tool in the region.

Already, IBG has played a major role in UM’s blockchain developments initiatives, which highlight the role of education and sensitization to the realization of a thriving blockchain economy. These projects include:

The RegTech Cube is an academic collaboration jointly initiated by the University of Malaya, IBG and QRC Group. While speaking at a conference on September 29th, Ms. Nur Husna Zakaria, a lecturer and researcher at UM’s Faculty of Law, described the three-layer organizational structure of RegTech Cube: the designated council overseers, the advisory board, and the student management committee. Although each organizational strata has separate responsibilities, they all work together to achieve the goals of the research lab.

Ms. Zakaria went on to state that the introduction of outreach programs and multidisciplinary courses on blockchain are some of the functionalities of the RegTech Cube. Additionally, the research outfit will issue a bimonthly newsletter and provide consulting services to blockchain-related firms. Nonetheless, the ultimate purpose of the initiative is to raise awareness and mobilize blockchain experts to introduce innovative blockchain solutions and products.

In order to bolster its partnerships with blockchain giants in Asia, IBG organized a gathering of blockchain stakeholders in October 2018 that included the likes of UM, IBL Group, VTOS, Blocklime, and ACCESS Malaysia. The event, “TECHNOMART: Adding Value through Blockchain,” also featured the input of the Malaysian Industry-Government Group for High Technology (MIGHT), which highlighted the importance of RegTech in the ongoing blockchain revolution.

Ms. Zakaria reiterated her stance on the importance of blockchain education initiatives, declaring that lack of awareness is one of the major limitations of talent development in Malaysia. As such, blockchain adoption will remain stagnant in the region if stakeholders do not contribute to the sensitization of the general public to the true nature of blockchain.

Fortunately, the collaborative project between IBG and UM is already generating innovative plans to expose Malaysia to the potentials of blockchain and its solutions. Both parties are also looking to establish a blockchain academic alliance that will encompass the whole of Asia, thereby facilitating a collaborative culture in this region.