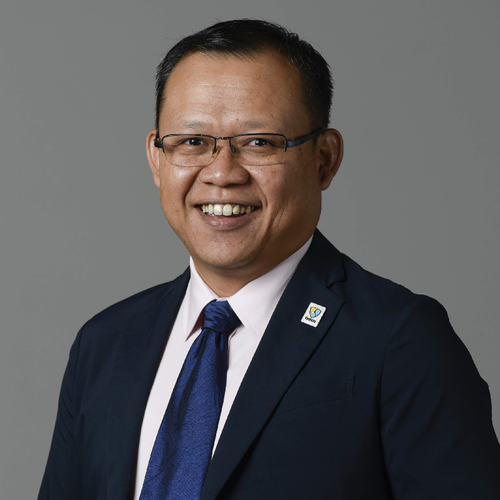 eCommerce is one of the key components of a country’s digital economy agenda. The Malaysian government recognizes the importance of eCommerce to the country’s economy based on two important reasons. First and foremost, eCommerce ensures existing Malaysian businesses continue to be sustainable in the future, and secondly, eCommerce helps to expand Malaysian businesses’ market access, not just domestically but globally. According to Malaysia’s National eCommerce Strategic Roadmap document, “By the end of 2014, Global eCommerce (B2C) sales exceeded $1 trillion with every continent seeing double-digit growth (doubling in four to five years). For Malaysia, eCommerce is the future—a way to protect its existing businesses and a means to pursue new opportunities. If successful, Malaysia will be able to compete on an equal footing in the ASEAN region and ultimately in the world”. 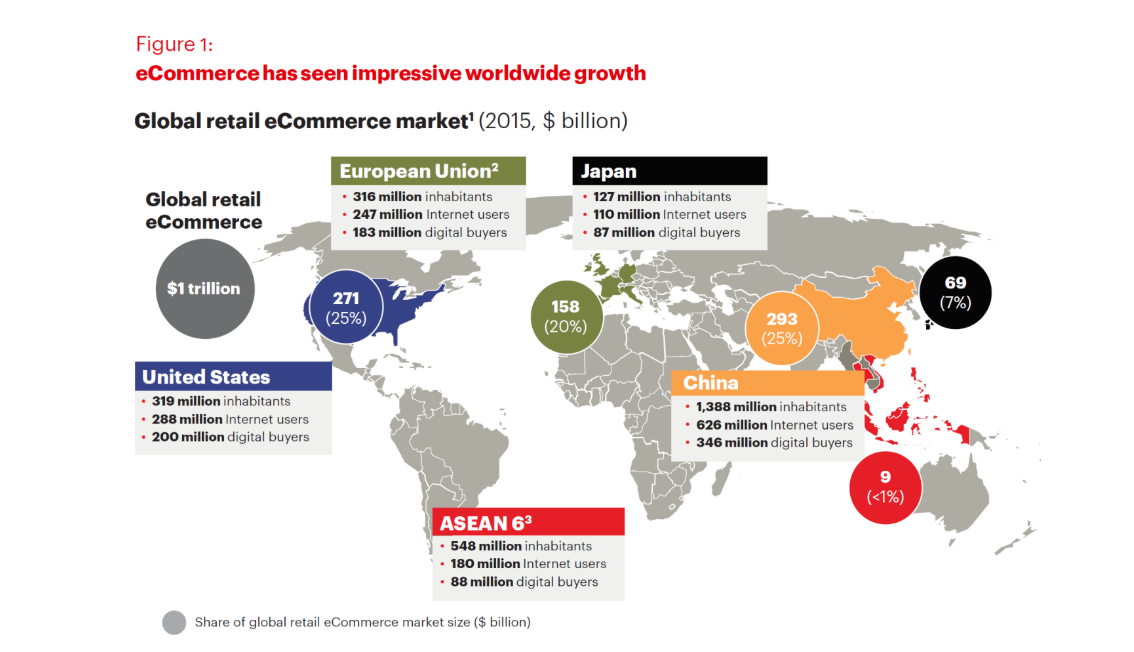 Launched on October 13th, 2016, Malaysia’s National eCommerce Strategic Roadmap (NeSR) encompasses the strategies and objectives of the Malaysian government as the champion of its eCommerce agenda and provided a strategic platform for close collaboration with local and global eCommerce ecosystem players. A notable key success story was the official launch of the Digital Free Trade Zone (DFTZ) at KL International Airport in November 2017. DFTZ has two key objectives. Firstly, it aims to “establish Malaysia as regional eCommerce eFulfilment hub” and, secondly, to “drive export of Malaysian SMEs via eCommerce”. Under the first objective, there will be an end-to-end platform for cross-border trade facilitation that will deliver expedited and seamless cross-border eCommerce Fulfilment processing. Meanwhile, the second objective will focus on enhancing the process efficiency and effectiveness of eCommerce Fulfilment by accelerating end-to-end turnaround time for cargo clearance using real-time cargo tracking and efficient enforcement through data analytics and machine learning. 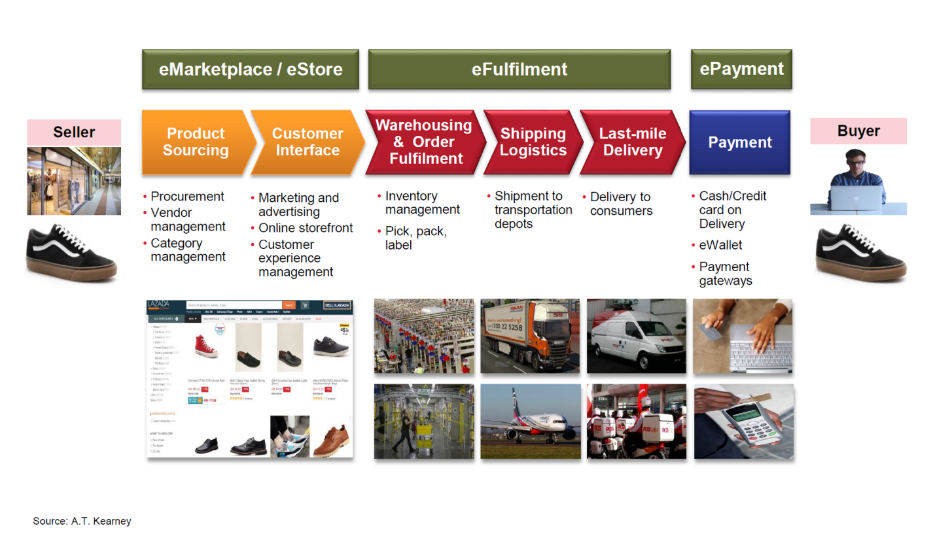 According to a survey conducted by Peerless Research Group (PRG) on behalf of Modern Materials Handling and Honeywell Integrated, the task of satisfying ever-increasing and demanding eCommerce customers is placing enormous strains on the eCommerce Fulfilment process and its managers. The survey concluded that “many reported concerns about their ability to respond to these intensifying challenges. More than one-half said that customer demands have intensified dramatically (51%) during the past 24 months and most others (37%) also contend that while expectations are escalating, the pressures may not be as extreme”. Because of these pressures, eCommerce Fulfilment service providers are more closely looking at the methods in which they are managing their order taking and Fulfilment operations. Furthermore, the survey stated that eCommerce Fulfilment services providers viewed that ”fulfilling more orders, faster, at a lower cost and with greater accuracy are challenges with which many are grappling. And, to support operations and preserve customer loyalty, the anxieties associated with getting orders out the door with insufficient manpower is also a top concern (25%)”. 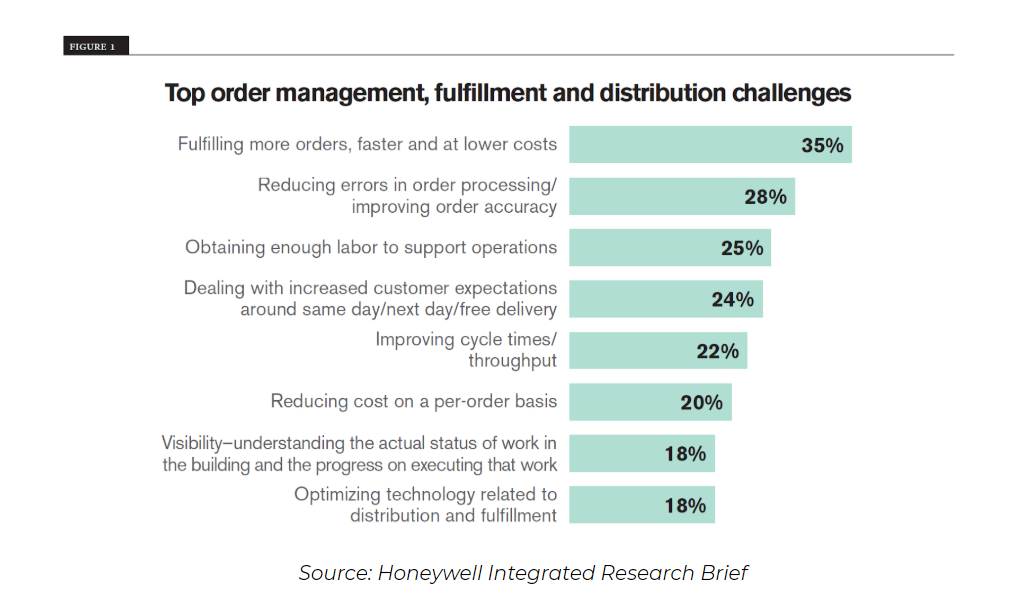 In addition to the above, the survey also found that “when it comes to identifying constraints to operational efficiencies, many reported that labour shortages, inadequate workspace and sub-standard inventory management processes stand in the way of their organization’s ability to achieve operational excellence”. 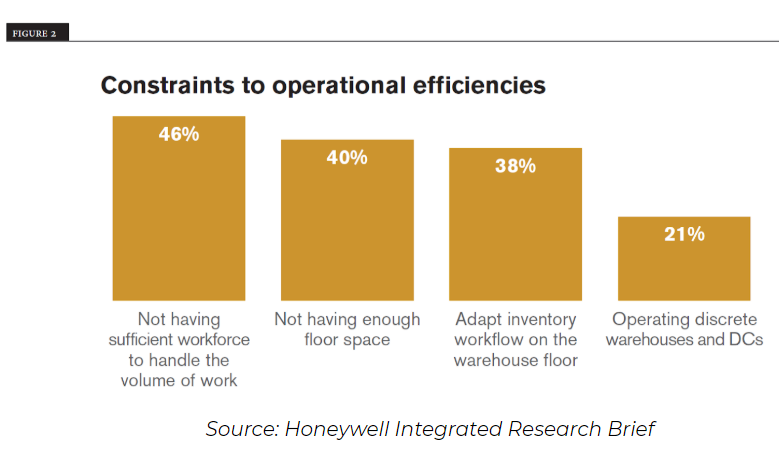 To mitigate the challenges mentioned above, eCommerce Fulfilment service providers “are addressing these challenges by making changes to their current facilities. The two most common initiatives include deploying more automated systems (44%) and adding manpower to their current labour force (37%); employing process improvement strategies and expanding the footprint of current facilities are also top of mind”. 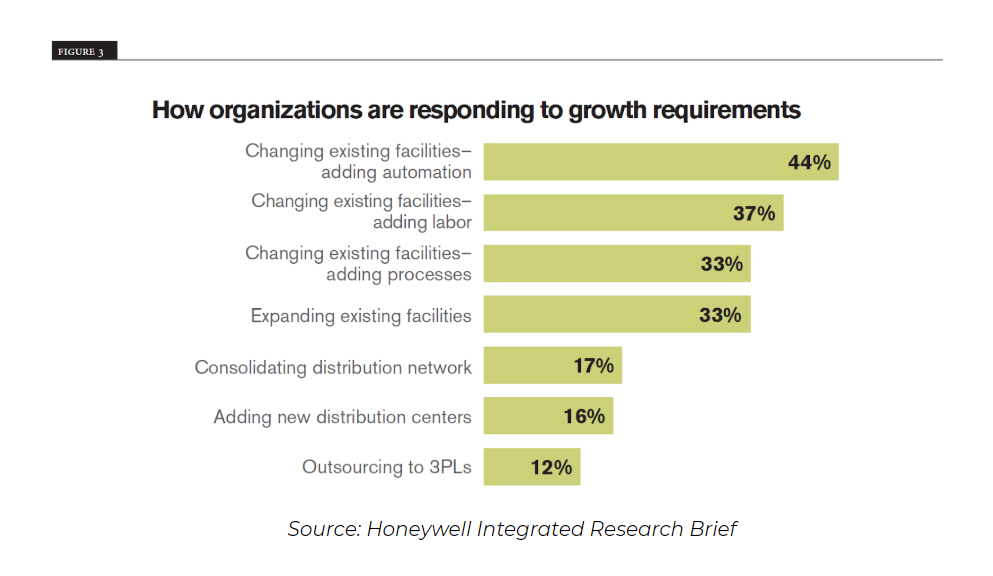 In addition to the above, the survey conducted also revealed that the eCommerce Fulfilment service providers are also having operational challenges, finding that “bottlenecks related to inventory management (39%) are the most likely deterrents to supply chain adaptability. Order processing, production, as well as delays brought on by suppliers are also common problems among the survey group”. 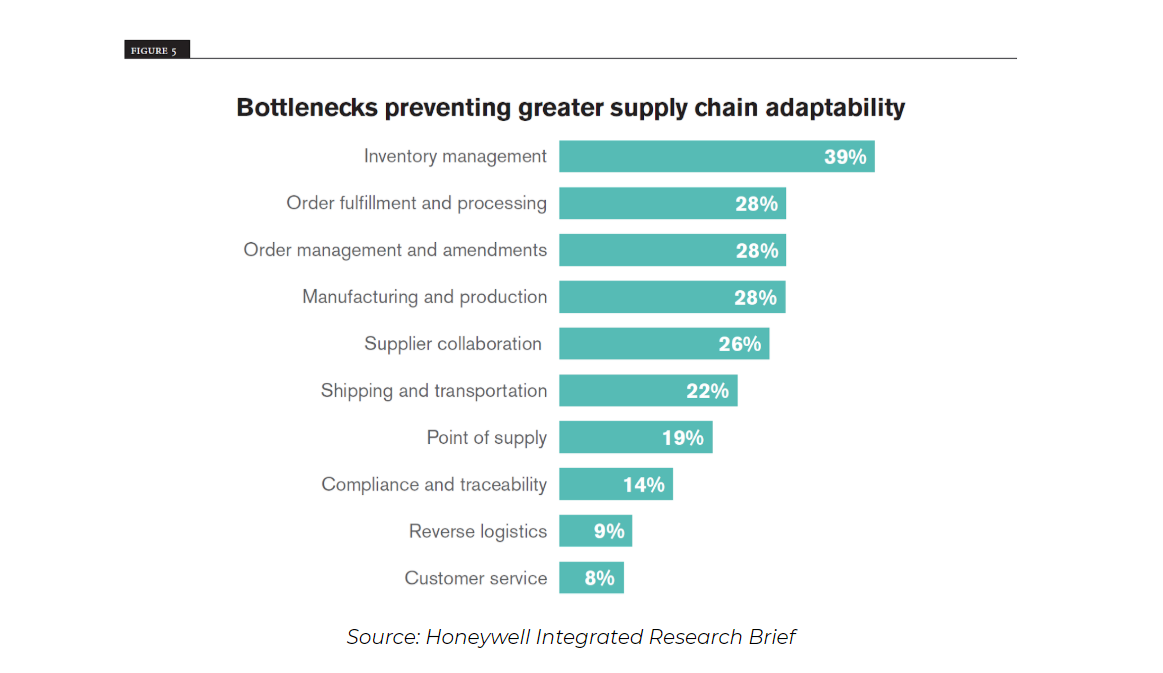 Blockchain technology stands as the best technology platform candidate to solve the issues being faced by eCommerce Fulfilment service providers. During the Blockchain Revolution Global event earlier this year held in Toronto, Canada, Dale Chrystie, FedEx Business Strategist and Blockchain Fellow; Mahesh Sahasranaman, Principal Architect of UPS Supply Chain Solutions; and Eugene Laney, Head of International Government Affairs for DHL USA, made history by sharing a single stage and agreeing that Blockchain can transform the global supply chain. According to Chrystie, “This is not a process improvement initiative. This is a breakthrough discussion. This is a different way to think about how global clearance looks in the future”.

The three of them collectively agreed that there is an immediate need for uniform standards and onboarding governments on Blockchain technology adoption for the global supply chain. Laney added, “Blockchain is a team sport; no one company today completes customer supply chain shipments by itself”, cementing his acknowledgment of Blockchain technology’s importance and impact, not just to his company’s operations but also to the global supply chain market ecosystem. Sahasranaman also supported the matter, saying, “The supply chain panel between UPS, FedEx and DHL should stand out as an example – that organizations regardless of how hard they compete, must seek to collaborate in areas that would maximize benefits from this technology to all supply chain participants”. For governments, it is imperative for them to be on board on the topic, as their role as regulators are key to ‘de-bottlenecking’ the issue. FedEx Logistics CEO Richard Smith rightfully said, “You’re the government. You can mandate that it’s widely adopted.’ Why not plant a flag in the ground and say in the next five years all importers have to be up on blockchain? It’s the only way you’re going to be able to do it without slowing commerce to a crawl”.

One of the areas of opportunity in how Blockchain technology can be adopted in the eCommerce Fulfilment process will be in the real-time, end-to-end tracking of items ordered online and delivered to customers. In NEM’s Blockchain technology “Smart Asset System”, items ordered online are represented as “Mosaics” or digital assets. The “Mosaics” are stored in NEM Wallets or user accounts of the operational staff involved in the entire eCommerce Fulfilment process. The movements of the items from Warehousing & Order Fulfilment, to Shipping & Logistics, and finally to Last-mile Delivery can be viewed inside the Blockchain environment through a web-based Blockchain Explorer. The Blockchain Explorer can be renamed as the real-time “Track-n-Trace” page and customized further to allow secure access by relevant eCommerce Fulfilment service provider’s staff, eCommerce merchants, online customers who ordered the items, and even government regulators. With the Blockchain Explorer or Blockchain-powered “Track-n-Trace” page, all issues pertaining to the items ordered and being processed can be identified and rectified immediately by all relevant parties.

Secondly, NEM will introduce a unique feature, among others, called “Multi-level Multisignature Accounts” in its next-generation Blockchain technology called “Catapult”, slated to be released by the fourth quarter of 2019. The unique feature is highly suitable for the eCommerce Fulfilment process, whereby it allows the interaction of various parties involved in a certain process on NEM’s Catapult. This is described further below. 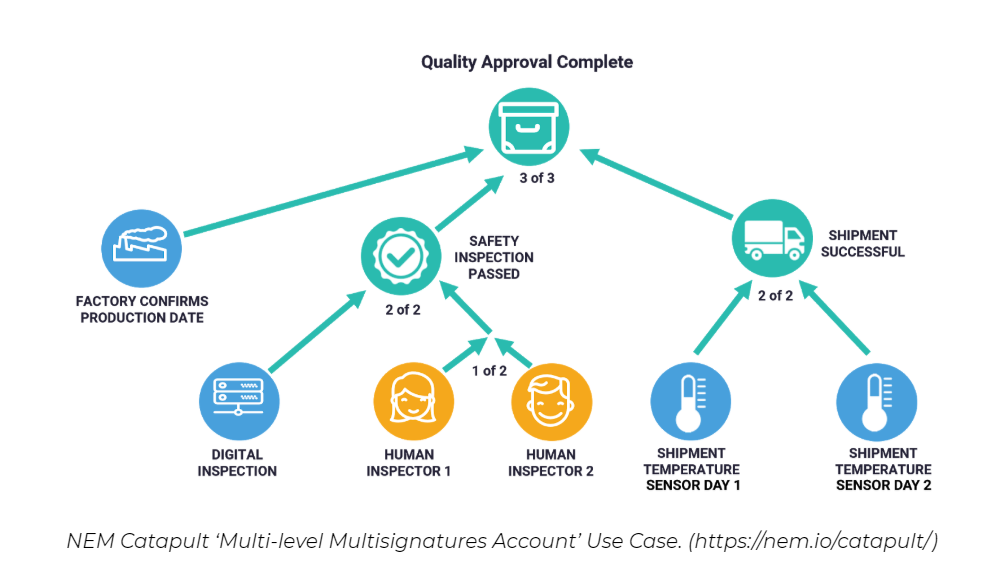 In addition to the above, NEM’s Blockchain technology is a versatile Blockchain protocol that is highly suited for the enterprise needs of the eCommerce Fulfilment process. With NEM’s “Smart Asset System”, NEM Application Programming Interfaces (APIs), and Software Development Kits (SDKs) available in Catapult, eCommerce Fulfilment service providers will be able to easily integrate NEM with their back-end systems. This unique capability removes the need to replace their entire back-end systems, further protects their Return on Investment (ROI), and improves Total Cost of Ownership (TCO) on existing systems. 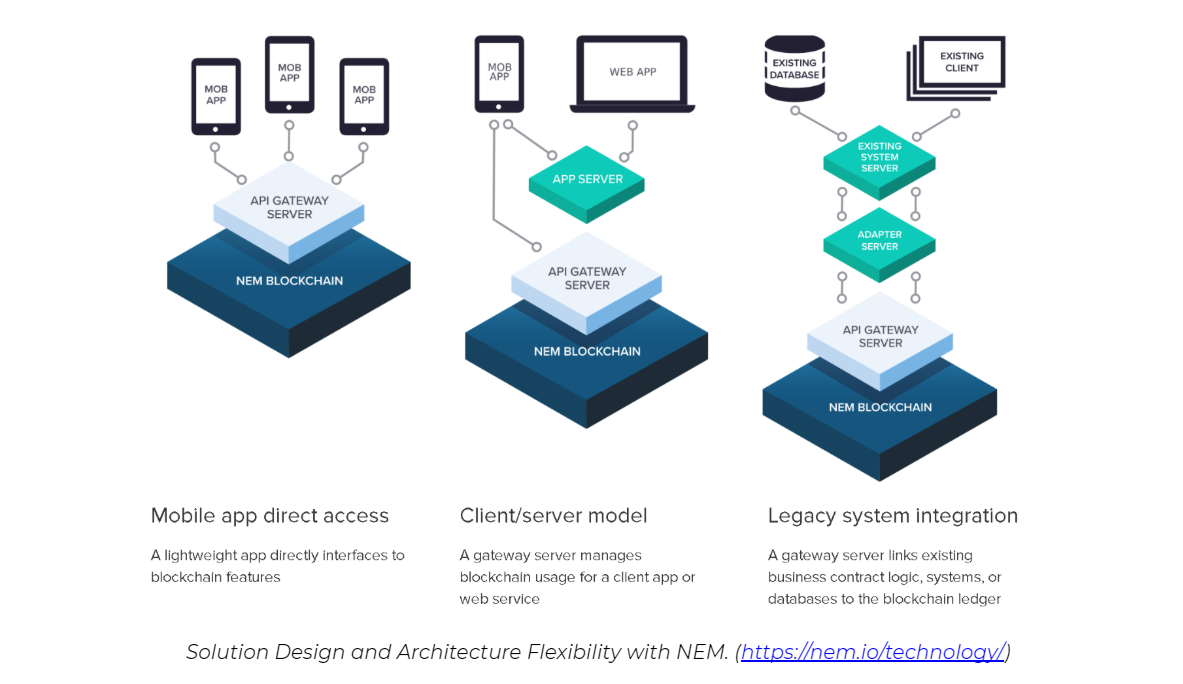 Andy Roy Sian is NEM’s government and public sector lead. Andy’s specialty lies in leading large institutional transformation, especially in the government and public sector. Andy is passionate about bringing Malaysia and ASEAN to the next digital revolution, and has been heavily involved in creating a vibrant blockchain ecosystem within Malaysia.