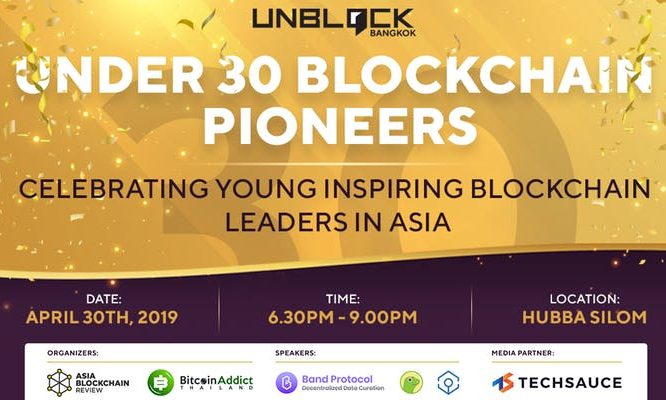 Welcome to the 6th Unblock Bangkok in April, the hottest month for the hottest blockchain leaders, to celebrate their success.

In this meetup, we want to inspire our blockchain community in Thailand with the success stories of our outstanding blockchain leaders, who made the list of Forbes’s 30 under 30 Asia and have become successful in their youth through their involvement in blockchain. What made them become entrepreneurs at such a young age? What about blockchain technology caught their eye? And what direction do they see for the future of blockchain and their companies? Unblock Bangkok will answer these questions and more.

We will be kicking off the event with opening remarks from our Unblock Bangkok team, before we start sharing experiences from each outstanding guest speaker, starting with Band Protocol’s Soravis Srinawakoon, the only Thai tech entrepreneur in Forbes Asia 30 under 30. He’s followed by Ryan Fang, Co-founder and COO of Ankr Network. And last but not least, we hear from TM Lee, Co-founder of CoinGecko.

Come and be inspired by the triumphs and tribulations of blockchain leaders, while networking with key players in blockchain space. Sign up now!